Just when one might have started thinking that the FED was running out of ideas to sustain the growth in the stock market, Jay Powell announced an unprecedented change to the inflation policy from 2% as a goal to 2% on average as the target. Not that inflation has gone up during years of balance sheet expansion, including in the EU, but it does provide more room should it pick up and pass the 2% mark. That news depreciated the dollar even further relative to the euro.

In more recent news, Japan was hit by the sad news of their long-standing Prime Minister Shinzo Abe announcing to step down due to illness after 8 years of service and one year before the natural end of his term. This exerted pressure on the Japanese stock market as it can be seen from the drop the $EWJ ETF had on Thursday. It will be interesting to see whether his successor will continue to embrace the so-called “Abenomics” and maintain the stability Abe achieved by ending a streak of several predecessors who only lasted 1 year on average as PMs of Japan.

The US stock markets have had an impressive week with the three main indices all closing 2%+ higher. Europe had a good week as the Stoxx index moved 1.1% higher but the national stock markets performance varied: for example Italy was up 0.7% while Denmark was down 0.3%.

No changes to our portfolio this week. Our best performer was $SYF which gapped 7.8% higher, followed by one of our two banks stocks, $BK, which grew by 5.1%. $GRUB fell 4.4%, however that’s not concerning given how much it has run over the past weeks.

On my watchlist there are stocks like $WDAY, $QCOM and inverse ETFs such as $SQQQ.

The table below summarises the portfolio performance since inception. 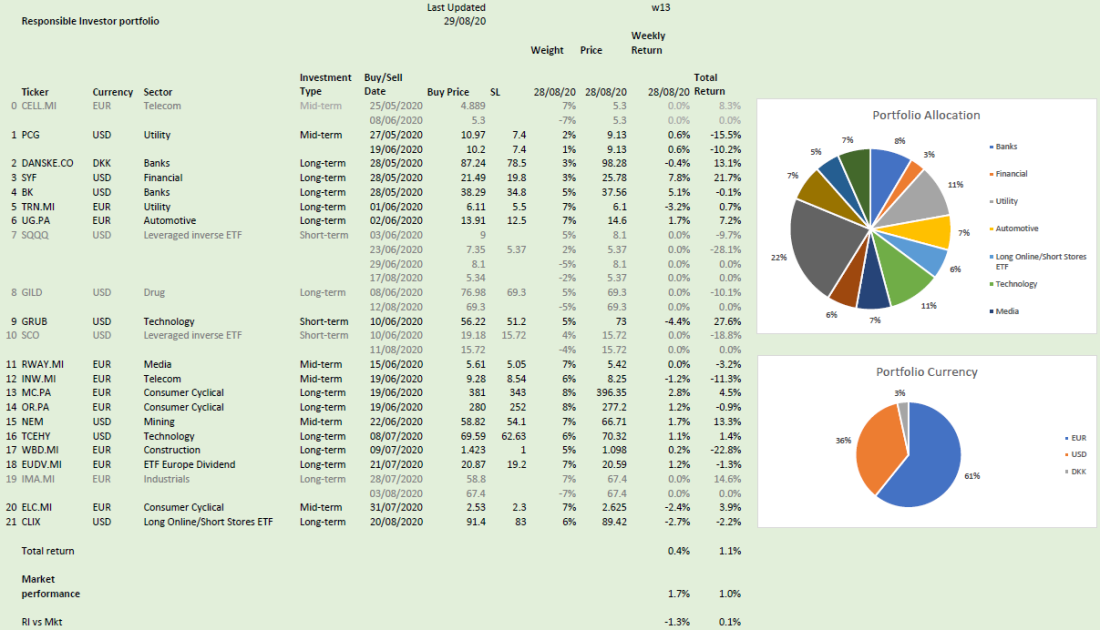 If you don’t want to miss my alerts, please subscribe to Responsible Investor or follow me on Twitter. I also run an eToro portfolio which currently has 30+ positions and can be accessed via this link.

View all posts by responsibleinvestor892405851